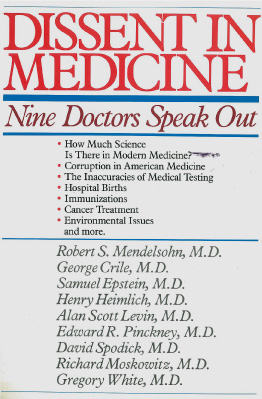 In the book, Dr. George Crile of the Cleveland Clinic, an early critic of radical mastectomy, says of cancer treatments: “the values of ultraradical surgery, of routine postoperative irradiation, and of adjuvant chemotherapy have been grossly exaggerated and oversold to the public.”

Other experts in the book point out the risks of medical testing, discuss environmental hazards to health, reveal instances of corruption in modern medicine, and report that obstetricians underestimate the harm caused to childbirth by hospitalization.