Confessions of a Medical Heretic
Dr. Mendelsohn's book about the dangers of modern medicine 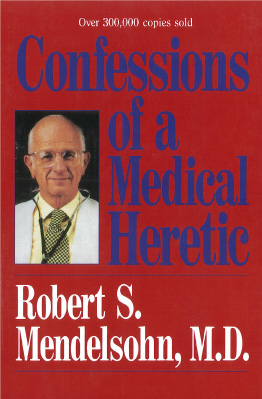 The first of his books to attract widespread publicity was Confessions of a Medical Heretic. In it, Dr. Mendelsohn insisted that patients had the right to information about the risks of their medical treatments and medications. Describing his efforts to make the Physician’s Desk Reference, the authoritative guide to medications and medical treatments, available to the public, Dr. Mendelsohn wrote that until two years before the publication of Confessions, the PDR’s publisher “refused to distribute it to other than members of the medical profession. I wasn’t aware of this when I gave the PDR many plugs in my column and newsletter. Finally, I got a letter from the publisher telling me to please stop referring people to their book since they distributed it only to professionals. They felt that the public wouldn’t understand the PDR and would be confused by it. Well, I published that letter in my column and I commented that it was the first time in history a publisher didn’t want to sell his books…” (p. 40)

Dr. Mendelsohn also argued that the methods of modern medicine were often more dangerous than the diseases they were designed to diagnose and treat. The question of whether a treatment creates more harm than benefit has become central to the now-current concept of “Evidence-Based Medicine”. He advised consumers to be suspicious of their doctors. “One of the unwritten rules in Modern Medicine is always to write a prescription for a new drug quickly, before all its side effects have come to the surface.” (p. 32)